Yeah, this is a niche comparison, but I’m the niche and I need to finish this one out so here goes.  First, ITIL is a service management framework for technology.  It has three levels: Foundation (1 test, no course required), Intermediate (either 4 or 5 tests and courses, depending on the type) and Expert (1 test, 1 course).  So the cheapest you get out is 5 courses, 6 tests.  There are a limited number of players in the online training market (which is the least expensive path) so that’s a good thing for comparing.  There are a myriad of ways to get the required “points” to be eligible for the Expert certification, which adds some complexity.  To figure out what you need, there is a Credit Profiler provided by the official ITIL folks.

Everyone starts with ITIL Foundation which is worth 2 points and the exam can be taken without the course for about $300.  After that there are two Intermediate tracks – lifecycle (5 courses for 3 points each) and capability (4 courses for 4 points each).  You need a total of 17 points from Foundation through Intermediate to be eligible to take the MALC (Managing Across the Life Cycle) course and exam for expert.  Once you subtract out the Foundation points, that’s 15 total points.  Ideally, you would take the ones that most applied to what you are planning to do with the certification while keeping an eye on the cost.  From a pure economic standpoint, you want to hit that 15 points in the least classes possible, so either 4 capability (16 points) or 3 capability and one lifecycle (15 points on the nose). 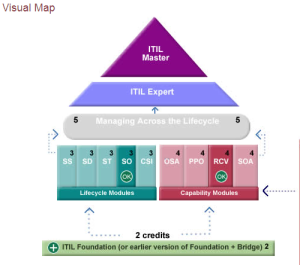 Yours truly has Foundation for 2 points, RCV (Release, Control and Validation) for 4 points and Service Operation for 3 points.  It’s important to note that there is overlap between the capability and lifecycle courses as well so you have to be careful not to nullify points by taking two sides of the same thing.  There are three degrees of overlap (low, medium and high) so be sure to consider those when choosing courses across different tracks.  Mine have a medium degree of overlap, so I’m good on selecting, but to hit my points on the nose without wasting a course I need two more capability (8 points).  The other option is three more lifecycle (9 points) but the cost is going to be significantly higher to do that.

On to the course and exam costs.  Financially for me, it makes the most sense to take two more capability qualifications – PPO (Planning, Protection & Optimization) and SOA (Service Operations & Agreements).  That said, I’d love to take three lifecycle qualifications – Service Strategy, Service Design and Continual Service Improvement.  So, let’s look at the math using a few different vendors.  The Art of Service offers web based training (self paced with video instructor), Global Knowledge and Pink Elephant offer virtual classroom (online with a live instructor).  We’ll use the AoS “Complete Examination Package” which includes the exam voucher since that is included in the virtual classrooms by the other vendors.  Capability courses are 5 days, Lifecycle are 4 days.  For comparison I’m using the PPO (capability) and CSI (lifecycle) courses:

OK, so pretty significant cost difference, though there are also other considerations – live instructor for questions and a set week of training is a huge plus for many folks and you have to have self discipline to do a web based self paced course (there is a time limit for both finishing the course and taking the exam with AoS).  The instructor leds also have some additional benefits (check the vendor websites) added in for free such as exam guarantees and exam prep sessions.  One disadvantage to instructor led is that you also have to take them when they are scheduled to run.  I’m pretty good at self paced training and study, so I can afford to go for the Art of Service web based training for $920/course.  With two more capability I can be done for $1840 or three lifecycle for $2760.  I should note for folks who are just starting out that all three offer learning pass or package programs for your entire certification you may want to consider.

Once I have my 17 points, the last qualification is Managing Across the Lifecycle (5 days) for 5 points and the Expert certification (22 total points).  Again:

With Art of Service I can buy a 3 pack for $894 per qualification, so I can finish out my remaining intermediates and my expert for $2682 (instead of $2760).  To do online instructor led, the cheapest I can get out without a package would be $8085.

Summary – if you are self disciplined enough to do web based video training within a time limit, AoS is a significant cost savings.  If you prefer a “live” instructor and can set aside a week to attend class online, Pink Elephant is less expensive on capability and MALC but the same as Global Knowledge on lifecycle.  Your choice will likely be limited by the scheduled dates, so plan accordingly.

Note: All prices were taken from the respective websites without any discounts or package prices applied.  They are obviously subject to a.) change, b.) sales and c.) package prices so shop around if you want to do physical or virtual classroom training.

Starting a new type of post here called “Do the Math”.  Everyone likes to save money and everyone likes to make good decisions, but that often involves math and most people don’t have the time or patience to do the math at the time the decision needs to be made.  On top of that, retailers know that even math nerds don’t haul around all the formulas and when they helpfully calculate for you, it’s never in equivalent amounts – one shampoo will be in cents per ounce, the next in cents per quart, another in liters (just in case you are down with imperial but don’t have a handy conversion to metric tool).  Makes me nuts.  So, I’m gonna pick something and do the math ahead of time so that I (and you) can make that call and feel GOOD about it.

First up – incandescent vs. CFL (compact fluorescent) vs. LED light bulbs.  Now, these guys have a lot of math associated with them and they also have some preference decisions (direction, time to warm up, general aesthetics, heat produced).  I’m sticking with the money numbers here.  So what you need to do the math is:

I’m interested in my recessed lighting bulbs since they seem to be burned the most and stay on the longest   Plus, I’ve got a snotload of them – including four that burn constantly.  I’ll take on the “regular bulbs” and “ceiling fan bulbs” in later articles just to see if the numbers are different based on the cost of the bulbs themselves. 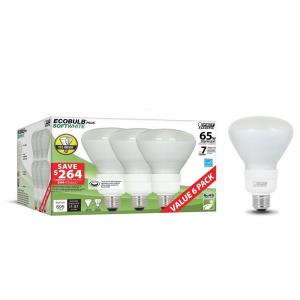 For this post I’m using Home Depot online prices simply because they are easy to find.  Not using dimmable bulbs and I’m going to include the lumens (brightness) since well, light is what light bulbs are all about.

OK, that’s a bit better, but dang – those fixtures are running me nearly $80 per year! (Time to look at timers since the switches are hard to reach, LOL!)

Looks like I’d save another $16 per year per bulb (though I wouldn’t see a savings for about 15 months based on the cost of the bulbs) to go to the LED bulbs though my big gain was dumping the incandescent bulbs.  So how about a “big number”?  Let’s say you have 4 bulbs per room in a 6 room house (obviously adjust – this is just a comparison) that are on 3 hours per day.  (Total cost x 3)

Looks like it will be worthwhile to start investing in those LED bulbs with the only problem being the 22 year lifespan at 3 hours per day given the *much* higher cost of the bulbs themselves.  Unless you are going to be in your house for 22 years or plan to yank all those bulbs and carry them with you when you move (I may well be cheap enough to do that, LOL!), it’s gonna take a while to realize the full benefit of the cost and “the next great thing” will probably come along.  LED bulbs have dropped in price dramatically since their introduction as have CFLs.  LEDs don’t have the disposal hazards of CFLs, however. 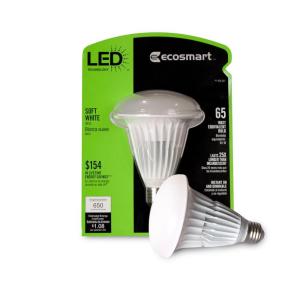 Looks like my strategy will be to start slowly replacing those “always on” and “hard to get to” bulbs with LEDs the same way I did with CFLs, hoping that by the time I get to replacing all the bulbs, the price of LEDs will have dropped another tier or two.  It’s also time to start talking to folks about turning out the lights (again).

Summary – if you are still using incandescent bulbs, you are pretty well tossing money away.  CFL bulbs are hazardous waste (bad) but a lot cheaper and last much longer (good).  LED bulbs are not hazardous waste (good), last waaay longer at lower cost but cost substantially more to buy (meaning that it may take a long time to realize the return on mass replacement).

Update:  Today I purchased 7 LED bulbs (4 40W recessed track lights for the 2 display cabinets, 2 flames for the back hall sconces and 1 standard for my bedside table light since I regularly fall asleep with it on and forget to turn it off in the morning) for “always on” lights at a total cost of $101.79.  This changes the numbers just a little as the total was $10 less than the sample bulbs I used in my calculations.  The “always on” cost for the bulbs plus the electric for a year is $165.07 (hence the next purchase of timers) or $13.75/mo.  To run CFLs in those for a year, the cost would be $132.16 (bulb plus energy cost) or 11.03/mo.  The LED bulbs will be paid for in savings at 14 months, leaving me with 31 months of bulb life.   The monthly pure energy savings for 7 bulbs for 31 months will be $3.17/month for a total of $98.27 in savings over the life of the bulbs.  Not too shabby for replacing 7 light bulbs.